Hit enter to search or ESC to close

What is the Definition of an Influencer?

The word “influencer” can mean something broad and something very specific, depending on the context. If you’re interested in influencer marketing, either as a brand or as an individual who wants to leverage your creator status for income, it’s important to understand both of these definitions. Let’s explore what “influencer” really means so you can apply this important concept to your marketing work.

The Most Basic Definition

Look up the word “influencer” in a dictionary and you’ll see a consistent theme: influencers are people who have the ability to motivate behaviors or convince people to believe something. Simply (and repetitively) put, an influencer is a person with influence over others.

According to this very broad definition, you probably encounter and even act as an influencer at various points in your daily life. You use rewards to help your kids develop healthy habits. Your boss motivates you to believe that his plan is the best one. A friend convinces you to try a new restaurant for happy hour. All of these mundane, everyday things are examples of influence.

Under this basic point of view, you may act as an influencer or be acted upon by an influencer several times a day without really thinking about it. It’s a pretty simple concept, but it’s easy to misinterpret. You don’t need to manipulate or coerce people to have influence.

A cult leader who uses false information and paranoia to convince his followers to drain their bank accounts is technically an influencer, but there’s more manipulation than simple influence in play in situations like that. If you present a person with honest information and don’t pressure them to make a specific decision, you exert influence without manipulation.

Applying the Basic Definition to Marketing

The basic definition of “influencer” is important in marketing for a few reasons. First, you can create better, more effective campaigns when you understand that certain people can have influence over your audience. Understanding who is most likely to influence the specific people you’re trying to reach is key to creating successful influencer marketing campaigns.

Ethics are also important. Brands can do themselves more harm than good, in terms of both public relations and business, when they engage in shady marketing or advertising practices. Manipulating or coercing your customers isn’t a great way to build long-term goodwill—it’s bad relationship marketing practice.

There are also legal considerations to incorporate into your approach to influencer marketing. For example, you may not be allowed to use a celebrity to advertise a specific type of product. In the USA, the Federal Trade Commission requires influencers to be honest and up front when they are paid to post something. Failing to disclose that an endorsement is actually a paid advertisement is more manipulative than it is ethically influential, and it’s also against the law. The FTC’s disclosure rules are a bit confusing to understand, but it’s easier to grasp when you understand the difference between genuine influence and lies or manipulation.

That high-level understanding is helpful in considering what “influencer” means in the context of influencer marketing. Can just anyone be an influencer? Essentially, yes. Even a cartoon character or another inanimate object can be designed to influence its audience’s behavior. Elmo, the furry red Muppet, is an influencer. Kids are likely to respond positively to anything his image is attached to, and that means that Elmo can have influence over his audience (and their parents).

In general, there are no hard-and-fast rules about who “counts” as an influencer for marketing purposes. It’s all about the goals of your campaign. There are some exceptions—in the UK, for example, government advertising watchdogs have created official definitions for things like “celebrity” because celebrities aren’t allowed to endorse medications and other drugs. If you have more than 30,000 followers on social media in the UK, you are considered a celebrity.

Not every country has government-defined parameters for concepts like celebrity, though. In our current media landscape, it’s entirely possible that a person could gain a visibly impactful following without having broad household name status. Think about kids and YouTubers—a parent with kids is much more likely to have heard of people like Shane Dawson than a 40-year-old without children. But the fact that only some people know who Shane Dawson is doesn’t mean he isn’t highly recognizable and influential to his audience.

However, it isn’t necessarily effective to split hairs on technicalities like this. After all, celebrities aren’t the only influencers. Even creators with small audiences of a few thousand can be useful influencer marketing partners.

Finding the Right Influencers for Your Campaign

Given that an influencer doesn’t have to have specific credentials, particular skills, household name status or even a high follower count, how do you go about identifying an influencer to work with? Your approach to this issue can make or break your influencer marketing campaign.

Smart influencer marketing strategy dictates that you’ll do a lot of campaign strategizing and optimizing before you even start looking for influencers. You should know all about your target market, including age, interests, income level, location and other demographics. Once you’ve gotten specific about who your audience is, you can be more effective in targeting the right influencer(s) to reach them.

Simply going for the most famous person you can get to say yes isn’t good strategy for influencer marketing. More fame doesn’t necessarily mean more influence. Oprah is super famous, but she probably isn’t going to motivate men in their early 20s to buy haircare products. Influencers can only have influence when people are interested in what they have to say and feel that their messaging is genuine and comes from an authentic place.

If you want to sell your haircare products to men in their early 20s, you’d want to use a celebrity who is both stylish and has influence over that audience segment. Depending on your brand’s budget, you could go for anyone from a male style influencer to a professional athlete or musician that’s popular with that particular age group. You could even have a popular beauty guru whose audience tends to skew female endorse the product and appear in sponsored posts with a boyfriend or husband. That could lead that influencer’s audience to buy your products for the men in their lives.

Focusing on Goals Rather than Labels

Ultimately, it’s important to stay focused on your campaign goals rather than splitting hairs about what an influence is and isn’t. People who have the ability to connect with their audience and create high-quality content can be valuable additions to an influence marketing campaign.

Don’t discount the value of smaller influencers, whether they’re up-and-comers on their way to a massive audience or smaller nano- or micro-influencers who have a very specific niche that’s small but very engaged. Even massive brands like Starbucks are starting to see the value in working with influencers who have relatively small audiences and niche appeal. This isn’t something small brands have to resort to—it’s actually a way to do influencer marketing right.

The ability to influence others is the only thing a person needs to be an influencer. Smaller-scale influencers can often be better engaged with their audience, which makes their followers feel more connected. That often translates to better, more authentic influence that you can leverage in your campaigns.

So if you find a creator you really want to work with, don’t worry about whether they “qualify” as an influencer. What’s important is how that creator connects with their audience, how the audience responds to that creator’s work and the authenticity of your campaign. 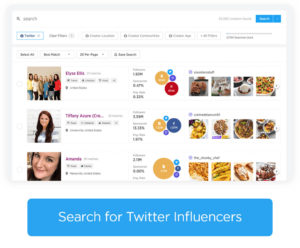